Emerging from the ashes of Charlottesville’s premiere psycho-surf band, Surfzilla, with lead/rhythm guitarist and trumpet player, Dave Hersman, and driving bassist, Dan Haig, the missing rhythmic ingredient was found in the brightly burning embers of American Dumpster, the eclectic junkyard folk-rock ensemble also from Charlottesville, whose versatile drummer, Warren Jobe, joined in to anchor the new sound with a solid badass funky beat.

When Victor Benshoff and his many keyboards were enlisted, the latent jazz sensibilities of the band burst forth in brilliant tension between tight-as-shit surf rock and experimental improv, and the tightrope-walking hard partying ethic of Jam Thicket was born.

Now, with its newest member, Shallel Octavia, who also currently plays with Positive Collective, the band is continuing to explore new realms of funky, latin-inspired beats and synth/keyboard-fueled pulsating mayhem that fans have dubbed Surfunkadelic.

With a solid lineup of original material that ranges from rhythmic rock and hypnotic soundscaping to infectious funk and up-tempo freakouts, Jam Thicket’s funky yet insistent grooves, provocative lyrics, catchy riffs, and inspired excursions into psychedelia lead the band and its audience furthur into uncharted realms of driving surf-rock and improvisational jamming. Just when you’ve been seduced into trippy submission with a trance-inducing vamp, they’ll throw a bracing bucket of water over your head with a classic ripping surf tune like Penetration, by The Pyramids.

Hey what about Victor?

Yes, well, that was rough.

Victor Benshoff, a 35-year veteran studio and live producer of many top musicians and bands in the Richmond and Charlottesville area, joined Jam Thicket in 2010 to renew focus on his own keyboard playing. Jam Thicket is at its heart a four way conversation that started the day we went to Victor’s studio to see what would happen when keys were added to a fundamentally rock and roll outfit. 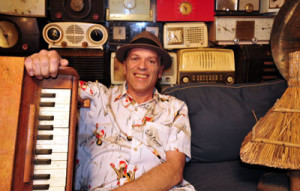 The surprising emergence of so much original Jam Thicket material, both songs and instrumentals, was due to the near-perfect balance of forces that Victor provided. Some of the new material came complete from one or the other of the band members, but most often a kernel of an idea brought in or even an accidental riff played while warming up would be seized upon and collectively worked into a new Jam Thicket number.

When there was enough material for an album, into the studio Jam Thicket went, and with Victor’s guidance as Producer quickly emerged with the tracks for Disconnected. It was during post production that we learned of Victor’s illness. With an inspiring will to endure, he kept at the mixing and overdub sessions even as his condition deteriorated rapidly and we all scrambled to do what we could for him. The last time any of us saw him was the day he handed over the final mixes to be mastered. 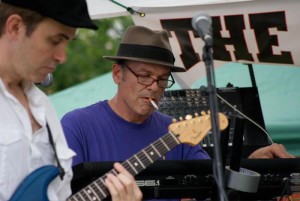 Victor was working at his own business doing sound system installs within five days of his passing; he was hauled out of a monster truck rally by the paramedics the next day, and they just saved him.

Ultimately, by not slowing down, Victor ran for life’s exit, and thereby made it out while he was still alive.

A Southern gentleman who lived life by his own rules, Victor was an inspiration in life and in death. Even though we can still hear him every time we play, we miss his crazy ass. We are lucky to have been found by Shallel, whose own spirited style of playing has provided compatible fuel for Jam Thicket’s engines while providing new directions for the band and our fans.